Sarah Dressler is originally from the Philadelphia area, she graduated from The University of the Arts, with a BFA in Crafts/Metals.  Her focus in college was largely on jewelry (both the making of and the more painterly skills of jewelry rendering) no matter what medium she is working in she continues to work on a jewelers scale to this day.

She discovered art dolls in 2001, and fell in love with the infinite variety of materials and styles that can be incorporated into these small sculptures.  Sarah does not feel tied to the classical human form and delights in drawing new patterns for her dolls creating new silhouettes and playing with proportions; creating characters and new anthropomorphic creatures.  Not content with the generic doll stand she has recently been creating small worlds for her dolls to inhabit, adding layers to the dolls personality.

Since art school she has worked in variety of mediums and in a variety of styles.  When her children were young she was active in the Society for Creative Anachronism, where she was given the highest possible awards for her contributions to the scribal arts.  It was within the SCA that she rediscovered the art of calligraphy.  Sarah has been demonstrating the art of calligraphy and illumination as featured artist at the Medieval Festival and the Sacred Arts Festivals at the Glen Cairn Museum, in Bryn Athyn, PA since 2009.

She has been published in Renaissance Magazine, as well as several issues of Art Doll Quarterly.  Sarah’s art dolls have been in several group shows at the Newark Arts Alliance, The Hudson Contemporary (AKA the Gibby), and The Dover Art League.

Teaching art in some capacity has been a part of her life since she was a camp counselor in her teens.  Within the SCA she teaches workshops on calligraphy, and a variety of aspects of medieval illumination techniques.  She has been teaching Mixed Media classes for children and teens at The Art Studio, in Newport, DE since 2008. Teaching keeps her fresh and constantly looking into new techniques to teach, which inevitably leads to new approaches to her own art. 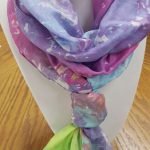 Artwork images on this website is the property of the individual artists represented
and cannot be used or reproduced without the permission of the artist.

February ~ Member Artist Show ~ Creating in the Time of Covid