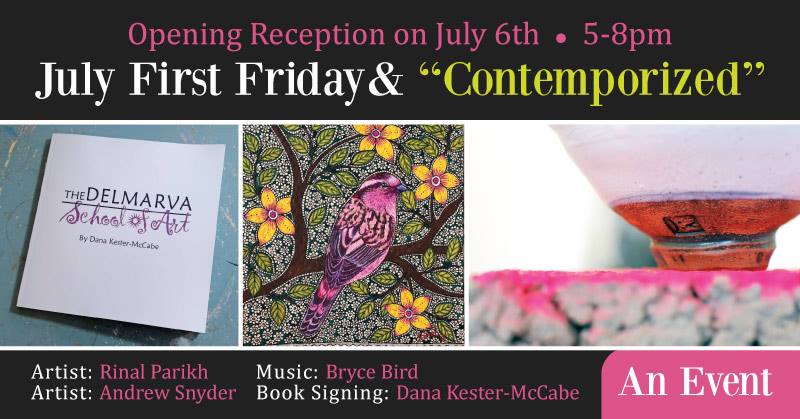 Dana Kester-McCabe will be signing her book “The Delmarva School of Art”. She is the owner of Moonshell Productions and has over forty years of creative experience in new media production and design, writing, photography, and painting. Dana has a BFA in fine arts painting and communication design from Kutztown University.

Rinal Parikh’s art reflects the heritage and vibrant culture of her native India. Rinal is a Bio-Chemist by profession and Artist by Passion. She draws on a childhood fascination with color and composition, portraying spontaneity and energy with saturated color in various media.

Her subjects are influenced by life in India, and she studies the many different styles of Indian painting that vary from state to state: “Although they are from the same country,” she says, “they are very different from each other- I find it intriguing.” Rinal’s work has appeared in India in group exhibitions and on magazine covers. In the United States, she made her debut with a solo exhibit at The Creative Living Room in Swarthmore in 2009, and since than her work has been featured in many juried exhibits.
​
Rinal has won several awards for her work, including the Loos award for Works on Paper at The Philadelphia Sketch Club and a 1st place award for watercolor at the Art Association of Harrisburg to name a few. She teaches children’s and adult watercolor classes in Swarthmore. Rinal’s artwork are mainly found in private collections in USA, Canada, Uruguay and India.

Andrew Snyder was brought up in the rural town of Rising Sun, Maryland. As a boy he was interested in drawing, but it was not until Andrew was a freshman in college that he found his true love, clay.

After studying ceramics and graduating from Towson University in 2001, Andrew began his career as a production potter at Eldreth Pottery. There began his real world education in the field of ceramics. His duties included throwing on the potter’s wheel to firing the salt kilns, and everything in between.
​
Never intending on a career in teaching, Andrew fell into a teaching position by a matter of happenstance in 2010 at West Chester University of Pennsylvania. As it turned out, he loved teaching as much as production, and ten years after graduating from Towson, returned to his Alma mater to pursue his MFA. Andrew continues teaching at WCU where he coordinates the ceramics and digital modeling departments. Currently he lives with his wife and two daughters in his home town of Rising Sun.