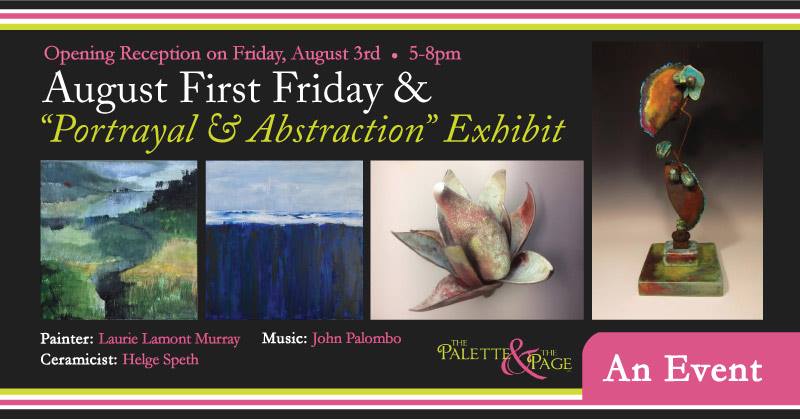 Laurie Lamont Murray’s background as an architecturally-trained interior designer is evident in her paintings and metal sculptures. On canvas, she finds herself reaching beyond the limits of the painted surface, so that adding 3-D to her toolbox became almost inevitable. With steel or canvas, she creates a conversation between shapes and colors, layers and line, recognized by its geometric element and strong sense of design.

Whether abstract or her own abstracted realism, Laurie’s work has won numerous awards in juried shows throughout the greater Philadelphia area, and her work is included in many private and corporate collections. Her studio in West Chester PA, is a popular destination during the annual Chester County Studio Tour.

Helge grew up in Europe, where she completed medical school. In 1970 she emigrated to the US with her husband and two children. Here she changed careers and obtained a degree in art education, a dream since childhood. Since her retirement from teaching Art, she has been able to focus on her endeavors as a ceramic artist.

Helge was juried to become a Master Artisan at the Pennsylvania Guild of Craftsmen and a Professional Artist Member (PAM) at the Main Line Art Center. Over the years she has exhibited and sold her work at a wide variety of venues, receiving numerous awards. Her most recent success was the acceptance to the international shows “Ceramic Innovations” and “Craft Forms”, both at the Wayne Art Center last year, and “Crafting Contexts” at City Hall in Philadelphia.
​
Helge continues to be in love with the Raku firing method. The close encounter of flame and smoke, with the ensuing, unpredictable magic of these elements on the clay surface, never ceases to amaze her. This technique seems to perfectly match the spontaneous, gesture-like feeling of her organic sculptures that were inspired by nature’s forms and a close connectedness to the earth.