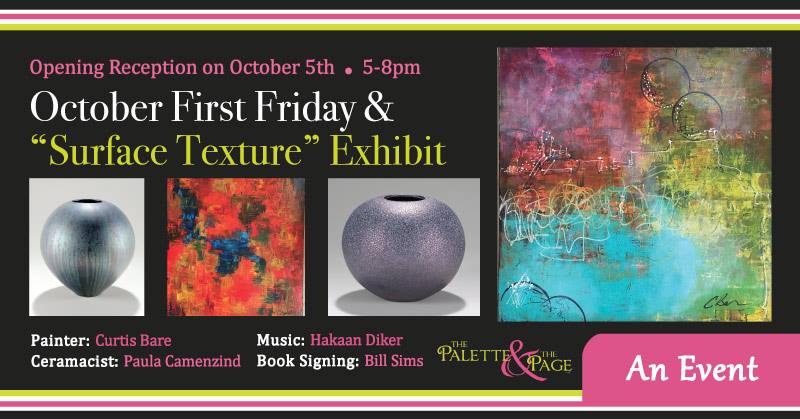 Bill Sims will be signing his book for all ages “Horatio, the Biography of a Mouse: A Real Mouse”

Curtis Bare is a self-taught artist, whose lifelong passion for art was finally realized after a long military career. The old excuse of never finding the time to paint was just that, an excuse. The military presented the opportunity to visit exotic places, all the while creating mental metaphorical notebooks of the vast array of interactions with different cultures throughout the world-which would later provide inspiration for his paintings.

After years of working loosely with watercolor landscapes, Curt began working with acrylics. Influenced by Helen Frankenthaler, Cy Twombley, and Joan Mitchell, he started experimenting with abstract expressionism, eventually resulting in a four-piece-panel titled ‘American Me’. That painting brought together color, line, texture, and gestural mark making, elements essential when producing emotional pieces that describe both the beauty and chaos that exists in nature, relationships, and minutiae of the world around us all. Today, these elements are manifested in the strong and deliberate sense of movement, line, and color, evident in all his paintings.

“When you’re creating your own stuff, man….even the sky isn’t the limit” -Miles Davis

Paula Camenzind (Newark, DE) holds a BFA and MFA in Studio Art from the University of North Carolina, Greensboro and studied with various potters at Penland and Haystack. She shows her work throughout the region and in the Carolinas and has taught at several colleges and universities. Currently, she is a full-time studio artist.

Timeless elegant forms with a surface that needs to be caressed – that is the goal off Paula’s art in clay. The form of the pot is primary and the surface decoration should serve to enhance the form. Her sense of aesthetic is grounded in the works of the ancient Chinese while surface decoration can be inspired by many different sources –from the iridescent sheen found in water puddles at gas stations, volcanoes, and the things I pick up walking on the beach – multicolored jingle shells, sea glass and coral.

In order to create these surfaces, Paula developed glazing techniques that require multiple firings with additional glazes or metallic compounds added between each firing in order to build up the depth and quality of surface and color. The pieces are porcelain thrown on a potter’s wheel.