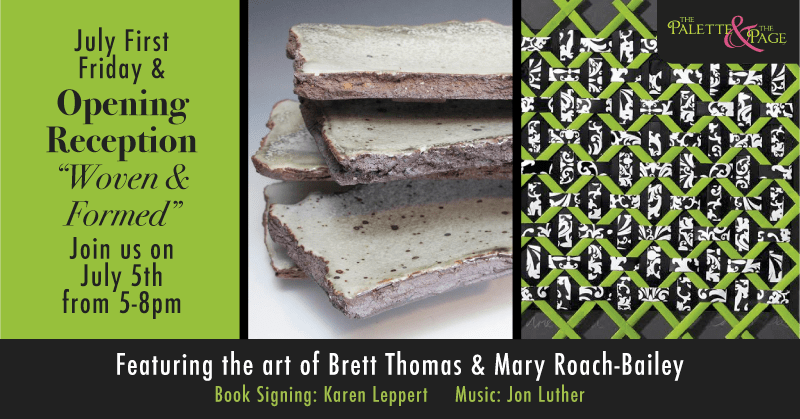 Karen Leppert, signing her books “Then & Now” and “Always”.

Mary Roach-Bailey was born in Seattle and lived in various cities in the U.S. as a child. While a student in the Kutztown University Communications Design Program, she began to collect papers from all over the world. This interest in the dynamics of color and line combined with a love of paper lead to the folding and weaving of colored papers to create vibrant and intricate patterns. The nuance of juxtapositioning colors and textures offers the viewer both the pure thrill of color and a meditative impression, like a visual chant, with an occasional bit of whimsy revealed. Some of the weavings are a view of a place, a thing, an idea or a person. She owes thanks to the girl scouts for teaching her how to weave sit-upons out of newspaper and to the artist Lorie Anderson for reviving that memory. She has shown her work in Philadelphia, West Chester and Lancaster. She lives in West Chester and works both as a freelance graphic designer and a weaver of paper.

Brett has resided in Media, Pennsylvania for many years. He studied at the Maryland Institute College of Art, where he received his BFA. He continued his fine art studies as a graduate student and teaching assistant at Southern Illinois University Carbondale where subsequently received his MFA degree. Brett’s current body of work finds inspiration from the medieval vessel called the trencher. A trencher was a type of dinnerware used to serve alms to the poor at the end of a meal. Brett uses shino glazes on these forms. He has designed his contemporary trenchers for entertaining, with the intention of serving and enjoying great food with friends and family. Brett also incorporates use of his trenchers at the conclusion of his course “From Kiln to Kitchen”, to share food with his classes. He currently teaches several classes at Cecil College in Elkton, Maryland. He also is the founder and owner of Mobile Raku, a traveling classroom that takes raku techniques to high schools throughout the northeast.